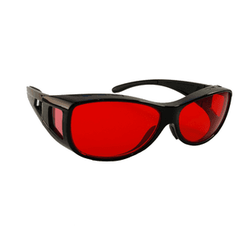 Red Anchromatopsia Glasses
Muriel Schornack, in the American Optometric Association journal, reviews a study in which patients were given red tinted glasses to ease their anchromatopsia-induced photophobia. The results were clear: patients “with tinted…lenses…experienced a dramatic reduction in photophobia with the lenses.” Schornack concludes that “tinted spectacle or contact lenses may be useful in relieving photophobia associated with a number of cone disorders, including achromatopsia.” Specifically, Schornack notes that, “those with complete achromatopsia may experience the greatest relief when using a red filter. Because long-wavelength radiation does not effectively stimulate rods, these patients can generally tolerate a slightly higher level of illumination through a red filter compared with lenses that transmit more short-wavelength light. Measurable improvements in visual acuity, decreased size of central scotomas, enlargement of peripheral visual fields, and enhanced visibility of long-wavelength stimuli in normal illumination have been reported" with the use of red tinted photophobia lenses.

An independent study, published in 2004 in the Journal of Ophthalmology, treated 23 patients with severe photophobia resulting from cone disorders with red lenses in order to “alleviate photophobia and improve their ability to use their remaining vision more effectively.” The study concluded that, “The [red] contact lenses immediately resolved the aversion to light, with dramatic improvement in visual function in all patients (determined by observation of the patient and by patient report). It allowed eight patients to become eligible to drive.”