Melatonin and Cancer: How Circadian Disruptions and Melatonin Deficiency Increase Your Cancer Risk

Exposure to Room Lighting Blocks Melatonin in Shift Workers
Most people are aware of Melatonin’s role in regulating sleep cycles and the 24-hour Circadian Rhythm; however, recent studies suggest that Melatonin plays a vital role in immune functions as well. For example, numerous studies have revealed an alarming link between shift workers—who commonly suffer from melatonin deficiencies–and cancer risk. In a 2005 meta-analysis of 13 independent observational studies in the European Journal of Cancer, researchers found that female shift workers had a “statistically significant 48% increase in the risk of breast cancer…Separate analysis of both shift workers excluding flight attendants and flight attendants yielded virtually identical results” (Megdal, Kroenke, Laden, Pukkala, & Schernhammer). Other studies have demonstrated significant links between melatonin deficiency and risks for colon and prostate cancer. A 2008 study discovered a strong correlation between light wavelength, melatonin production, and immune response. The researchers found the “The potential to suppress or activate the immune response depends mostly on the wavelength of light which also induces specific changes in the production of neuroendocrine hormone-melatonin, which in turn may directly modulate the immune responses via its membrane receptors present on lymphoid organs” (Haldar &Ahmad). In other words, low wavelength (blue) light at night was shown to suppress both melatonin production, and in turn, the body’s general immune response. 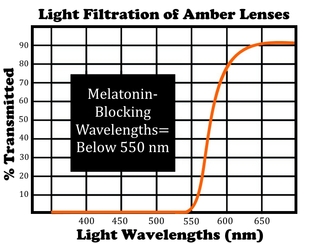 Amber Glasses Filter out Melatonin Blocking Wavelengths
Numerous studies suggest that healthy melatonin levels can have a significant impact on cancer and cancer treatment. According to a presentation by David Blask, M.D., Ph.D. from the Laboratory of Experimental Neuroendocrinology/Oncology, “At pharmacological concentrations, melatonin suppresses cancer cell growth and multiplication. At physiological and pharmacological concentrations, melatonin acts as a differentiating agent in some cancer cells and lowers their invasive and metastatic status by altering adhesion molecules and maintaining gap-junction intercellular communication. In other cell types, melatonin, alone or with other agents, induces programmed cell death.” According to another presentation by Paolo Lissoni, M.D., Division of Radiotherapy and Oncology, San Gerardo Hospital, Monsa, Milan, Italy, “In a randomized study of 450 advanced cancer patients with poor clinical status or chemotherapy-resistant tumors, melatonin seemed to enhance tumor response rate, prolong survival time, and prevent chemotherapy-induced thrombocytopenia, cardiotoxicity, neurotoxicity, and asthenia.”

Room Lighting can block 99% of Melatonin
Two recent independent experiments on mice demonstrate the positive effects of melatonin supplementation and the negative effects of melatonin deficiency, respectively. In a 2010 study, researchers regulated the melatonin intake of aging mice over the course of nine years. The study found that one “effect of the melatonin dosing in aged mice [>26 months]” was that “the tumor incidence was markedly reduced. Furthermore, the severity of any visible tumors was lessened in melatonin-treated animals.” (Sharman, Sharman, and Bondy). Researchers also noticed that melatonin supplementation had a strong correlation with longevity, as “over 91% of melatonin-treated mice survived to 26.5 months age, while only 82% of untreated mice attained this age.” 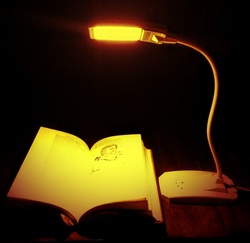 Amber Lamps Protect Melatonin Production
﻿Additionally, a 2015 study used genetically engineered mice to experimentally replicate the strong observational correlation between shift work and breast cancer. Mice that were genetically predisposed to developing breast cancer were split into two groups: the control group was exposed to a reliable 12 hours of light and 12 hours of darkness for the duration of the experiment, while the experimental “shift worker” group had their day-night cycles reversed each week. In the end, the “shift disrupted” mice were less active, gained excessive weight, and developed breast cancer an average of 8 weeks sooner than the control mice (at 42 weeks versus 50 weeks). It should be noted that these health effects were not simply the result of sleep deprivation. In fact, the shift disrupted mice spent 50% more time sleeping than the control mice. Rather, the results can likely be traced to a deficiency of melatonin and a subsequent disruption of the circadian rhythm. The researchers conclude: “our data suggest internal desynchronization and sleep disturbance as mechanisms linking shift work with cancer development and obesity.” 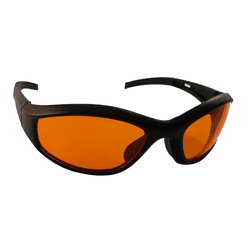 Blue Blocking Amber Glasses
While melatonin supplementation may be one tool for managing cancer and other immune risks, the surest, most natural remedy for melatonin deficiency is light regulation. Numerous studies over the past 50 years have demonstrated the relationship between blue light and melatonin production (Link: see Light and Melatonin). According to Kayumov (as cited in Alpert, Carome, Kubulins, and Hansler, 2009), research subjects who wore blue blocking glasses and worked a simulated night shift, “continued making melatonin much as they had when kept in darkness.” The subjects not wearing amber glasses had a delay in their melatonin production, and produced significantly less melatonin than the subjects wearing the blue blocking glasses. Wearing amber glasses (which block blue wavelengths from reaching the retina) or switching to amber light (which contains a lower percentage of blue wavelengths) in the evening have both been proven to normalize melatonin production and help regulate sleep cycles. 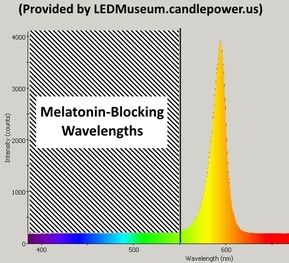 Blask, D. (2003). Melatonin: An Integrative Chronobiotic Anticancer Therapy Whose Time has Come. Presented at “Melatonin, Chronobiology, and Cancer” presented by The NCI Office of Complementar and Alternative Medicine. 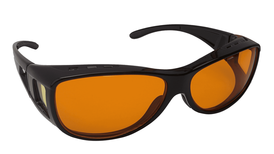