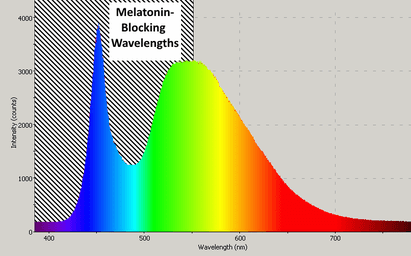 Blue Light from a Computer Screen
Insomnia and irregular sleep patterns are both incredibly common side effects of bipolar disorder. In fact, bipolar disorder and insomnia have a cyclical relationship, with sleep deprivation acting as a common trigger for manic episodes and mania a common cause of sleep disturbances. Many with bipolar disorder feel that their sleep patterns are out of their control. However, new research suggests that light and dark therapy, specifically blue-blocking bipolar glasses, may offer drastic improvements in bipolar insomnia without the use of medication.
​
Dr. Jim Phelps of PsychEducation.org summarizes the recent research by suggesting that “you might be able to significantly regulate your bipolar cycling, and at least find it easier to go to sleep at night (without medications like zolpidem (Ambien), lorazepam (Ativan), trazodone, etc.), by avoiding blue light at night.” Phelps recommends a consistent regimen of bright light in the morning and “simulated darkness” (through the use of amber sleep lights and amber sleep glasses) at night. Bright (blue) light in the morning helps to tell our bodies to produce wakeful hormones and neurotransmitters, while the absence of blue light at night tells out brain to slow down and begin producing the sleep hormone melatonin. This regimen is actually the most important piece of sleep hygiene for anyone suffering from a circadian rhythm disorder, though it may have even more far-reaching implications for bipolar sufferers.

Bipolar Sunglasses Block 99% of Blue Light
In 2014, a group of Norwegian researchers performed an extensive case study on a 58-year old patient who had been diagnosed with Bipolar I disorder. The patient was admitted to a hospital with episodes of severe mania and sleep deprivation. For the first seven days in the hospital, the patient was given clear glasses as a control, during which neither his mania nor his sleep disruptions subsided. For the following six days, the patient was given blue blocking glasses to wear in the evening. The researchers report that, “the transition to the blue-blocking regime was followed by a rapid and sustained decline in manic symptoms…and markedly increased regularity of sleep intervals. The patient's total length of hospital stay was 20 days shorter than the average time during his previous manic episodes.” While wearing the blue blocking glasses, the patient’s sleep irregularity was reduced from 116 minutes to only 12 minutes. The study concludes that, “During the blue blocking regime, mean motor activity and the variation in motor activity during sleep intervals also declined, demonstrating less disrupted, deeper and more sustained sleep.” 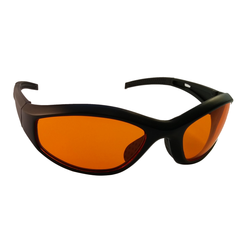 Blue Blocking Glasses for Bipolar Insomnia
An earlier 2007 study which treated bipolar insomniacs with bipolar sunglasses found similar results. According to the study, over half of the participants showed a positive response to the treatment, which allowed them to fall asleep significantly faster. Only two participants complained of the treatment, noting that the amber glasses “made them fall asleep earlier than they wished, interfering with television or computer game use" (Phelps). In other words, the glasses worked too well. However, for those with bipolar insomnia or related sleep disorders, falling asleep early may seem an unequivocal boon. Moreover, as sleep deprivation is a common trigger of manic episodes, increased sleep regularity may even lead to fewer episodes of mania.

​A new chronotherapy study published in May 2016 in the peer reviewed journal Bipolar Disorders concluded that blue blocking glasses “are effective and feasible as add-on treatment for bipolar mania.” The Norwegian study started with 23 individuals who had been hospitalized with bipolar mania. Half of these patients were randomly assigned to wear amber-tinted blue blocking glasses after 6 pm in the evening, while half were instructed to wear clear lenses as a control.

The researchers conclude: “Our results are strongly indicative that light, more specifically blue light, is a major environmental factor maintaining bipolar mania…Most importantly, however, this study implies that [blue blocking] glasses, used in accordance with our protocol, are a safe and efficient intervention for bipolar mania that should be utilized in treatment efforts.”

For a more extensive examination of light and dark therapy for bipolar disorder, read the following article at pyscheducation.com 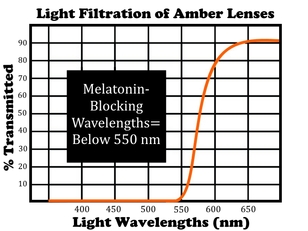