How Do Photophobia and Migraine Glasses Work? 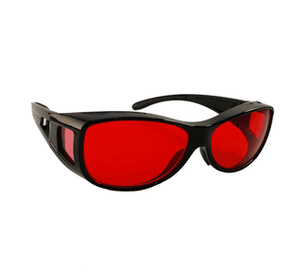 Rx Fitover Migraine Glasses
In a 2005 study, researchers found that red tinted lenses provided “rapid, safe, nonpharmacologic relief to most patients with acute migraine pain” (Mahoney). The researcher, Richard Garrison, M.D., explained that the lenses work by blocking shorter (blue) wavelengths of light, which overstimulate receptors in the retina, exacerbating migraine pain. The study examined 33 subjects with histories of migraine headaches, instructing them to insert dark red contact lenses during severe migraines. Astonishingly, “The light-filtering lenses brought immediate pain relief to 31 of the [33] patients. With the exception of two subjects--who, in addition to migraine, had diagnoses of photophobic muscle contraction headache and pseudotumor cerebri, respectively--all of the other patients [in the study] had relief within minutes of inserting the lenses, and pain relief was maximal within 90 minutes," Dr. Garrison reported.  In fact, “All but 5 of the 31 migraine-only patients had total pain relief, and the 5 who did not get full relief had significantly reduced final pain scores of 0.5-1.5 on a 10-point visual analog scale” (Mahoney). 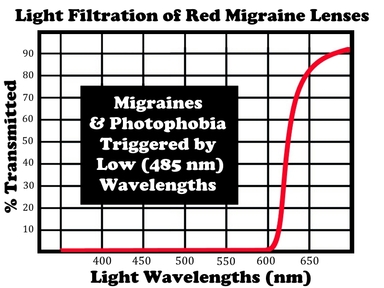 Red Glasses Block Migraine-triggering Short Wavelengths
Diana Mahoney writes, “Of the 26 patients reporting total relief of all migraine pain, 5 reported complete relief within 10 seconds of the insertion of the second lens. For most patients, pain relief began within 5 minutes, and approximately 50% relief was obtained within 20 minutes, Dr. Garrison said.” Mahoney continues: It is unlikely that the migraine relief observed was a consequence of a decreased intensity of light in general. If it were, any darkening strategy would work just as well, and that's not true, he explained. “People with migraines do seek darkness for partial relief from headache. But even total darkness only diminishes, does not ablate, headache.” In fact, it may be that by blocking certain light wavelengths and admitting others is the key. "Whereas certain tinted filters block stimulation of migraine pain, the admission to the retina of filtered light may actually inhibit migraine." Dr. Garrison hypothesized.

In an independent 2011 study, “Jie Huang of Michigan State University's Department of Radiology used functional magnetic resonance imaging, or fMRI, to reveal how precision tinted glasses for migraines normalize brain activity in patients with migraine headaches, preventing such attacks” (Health & Medicine). The study revealed that, “the precision-tinted lenses had a significant effect (70 percent improvement)” in migraine relief and prevention. 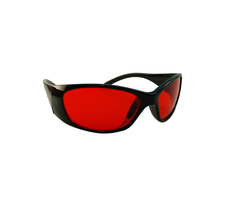 Kids Migraine Sunglasses
A 1991 study by Good and Mortimer found that wearing Fl-41 rose tinted glasses had a preventive effect on migraine attacks in schoolchildren whether they were prone to migraines with or without auras. In the study, Good and Mortimer began with 20 young subjects who suffered from chronic migraines, both with and without accompanying auras. The researchers compared the use of blue tinted glasses (the control) with fl-41 glasses for a period of 4 months. The study concluded that, while both tints seemed to offer relief in the first month, “only children wearing rose tints sustained this improvement up to 4 months, when the mean headache frequency had improved from 6.2 per month to 1.6 per month.” In other words, light filtering glasses for migraines could represent a safe, effective means to reduce light triggered migraines in both children and adults. 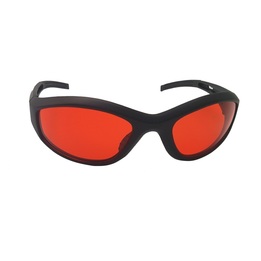 Anti-Migraine Glasses
A 2012 experiment tested light sensitive patients to compare their physiological responses to red light (640nm) versus blue light (485nm). The most intense and sustained aversion (as measured through photic blink reflex) was to bright blue light, leading the researcher to conclude that the “sustained EMG response to bright blue light provides evidence for a melanopsin mediated photic blink reflex.” This result supports observational evidence that links the photophobic response to the eye’s melanopsin receptors, which are only susceptible to low wavelength (blue) light. In other words, because photophobia is triggered by blue light hitting melanopsin receptors, the blocking of blue light with light filtering glasses should significantly reduce eye strain and photophobia in light sensitive individuals (Kardon 2012).

To read the latest research on red glasses and cone disorders click here. 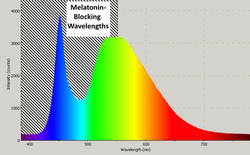 Blue Light from Computer Screens Can Cause Eyestrain and Migraines
Sources:
​
Afra, J. Influence of Colors on Habituation of Visual Evoked Potentials in Patients With Migraine With Aura and in Healthy Volunteers. Headache 40.1 Jan 2000: 36-40. American Association for the Study of Headache. 14 Aug 2015.