ADHD Insomnia Linked to Device Use 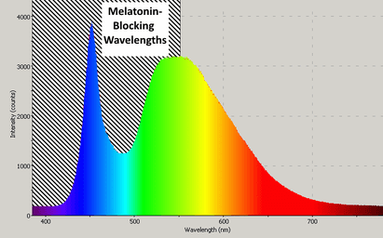 Typical Computer Blue Light Output
Those suffering from Attention Deficient Hyperactivity Disorder (ADHD), also known as Attention Deficit Disorder (ADD) tend to have a much higher rate of insomnia than the general population. In fact, ADHD, which effects 4.4% of adults, has self-reported insomnia rates of 70%. ADHD insomnia is associated with increased use of late night cell phone and computer use, devices which exacerbate insomnia through overstimulation and exposure to blue light, which has been proven to block production of the sleep hormone melatonin by up to 99%. A 2013 study found that nighttime use of amber glasses, which block over 90% of blue wavelengths, can dramatically improve the sleep health of subjects with ADHD. The three week study gave participants a pair of amber glasses (which block wavelengths below 530 nm) which they were instructed to wear from sundown until bedtime each evening. In addition to the amber glasses, subjects were instructed to limit their exposure to bright overhead lighting.

Smartphone Blue Light Emissions
The report found that the 14 subjects who completed the study wore the glasses, on average, 2.4 hours daily (less than the minimum 3-hour recommendation for the researchers). Despite only partial compliance with the research criteria, researchers found that the subjects’ sleep scores had improved in every area of the Pittsburgh Sleep Quality Index (PSQI). The report notes:

"Compared with baseline, the intervention resulted in significant improvement in global PSQI scores, PSQI subcomponent scores, and sleep diary measures of morning refreshment after sleep (P = 0.037) and night-time awakenings (P = 0.015). Global PSQI scores fell from 11.15 to 4.54, dropping below the cut-off score of 5 for clinical insomnia. The more phase-delayed subjects, ie, those with an initial midsleep time after 4:15 am,trended towards an earlier midsleep time by 43.2 minutes following the intervention (P = 0.073). Participants reported less anxiety following the intervention (P = 0.048)." 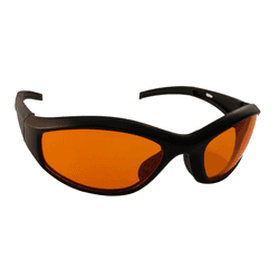 Blue Blocking ADHD Glasses
As the report indicates, the intervention worked so well that the average subject score fell below the threshold for clinical insomnia. The subjects reported improvements in subjective measurements, such as reduced anxiety and increased morning refreshment, as well as objective measurements, such as earlier sleep times and fewer night-time awakenings. The most important data might be the reduction of sleep latency by over 43 minutes. The study concludes: "Despite only partial compliance with intervention instructions, subjects completing the study showed subjectively reduced anxiety and improved sleep quality on multiple measures. The more sleep-delayed subjects trended toward an earlier sleep period following use of the glasses. Blue-blocking glasses are a potential insomnia treatment for more compliant subjects with ADHD insomnia, especially those with prominent sleep delay." 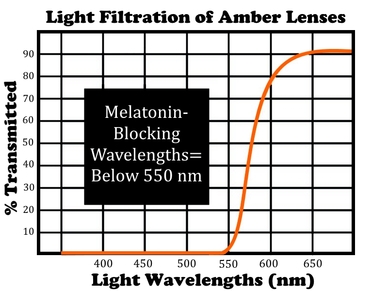